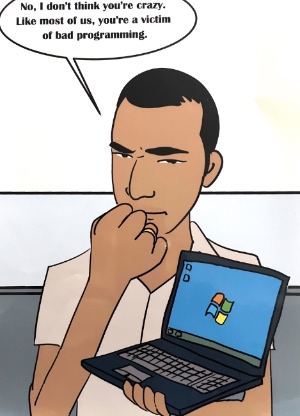 I grew up in a modest one bedroom apartment in a suburb of Mumbai, the teeming entertainment capital of India. As a child, I was a bookworm except when playing cricket with friends in my apartment building facing a busy street. I spent most of my time reading and playing cricket until one day my Dad got me a ZX Spectrum microcomputer, a completely unexpected gift. Although it mustn't have been easy to afford, it opened a portal into an unsuspected alternate universe that I inhabit to this day.

I dimly realized yet couldn't fully comprehend the latent power in the little black box that looked like a keyboard and plugged into a TV set. It didn't have anything other than a BASIC interpreter. Games and programs had to be typed in to run them. I stumblingly learnt the rudiments of programming. I was able to write simple programs by the time I was in college.

While in college, many a happy hour was spent in the computer lab with BASIC, Fortran, Pascal and C and 8088 IBM PCs. Realization dawned that the genie in the box was more far powerful than I had imagined when I learnt about recursion - the ability of a program to converse with itself in an infinity mirror kind of way limited only by a terminating condition. Computer programming became my favorite subject, and a career in hardware engineering was forsaken for one in software.

As I worked in industry, I understood that designing and writing algorithms was only one side of the coin. The other side was the management of complexity and the processes leading upto and beyond writing code. Ensuring software applications were long-lived, reliable and amenable to change was equally important. The genie in the box cavalierly punished sloppy practices. This led to a deepening interest in software engineering as a discipline in its own right.

I have since worked with companies like Fandango and Bank of America architecting websites and batch systems for selling movie tickets and trading mortgage backed securities using technologies such as AWS, lambda, .NET Core, nodeJS, SQL Server and DynamoDB. Creating software that not only satisfies constraints, but is maintainable and malleable have been central concerns over the years.

Photography has been a hobby for a number of years. It is a form of walking meditation, an awakening to the richness and complexity inherent in mundane things.

Writing is another hobby of more recent vintage. Besides tech posts, I have written a series of short stories about a pair of maverick, prank-loving kids - an Indian Tom Sawyer-Huck Finn. One a dreamer, the other a doer. They have an optimistic, scientific and liberal outlook on life and strive to understand and improve the world in their own small, charming ways.

Lastly, I'm a fan of Test cricket, an increasingly unpopular, modern day anachronism. Played over a whole work week, it frequently oscillates between mind-numbing sedateness and feral excitement. It demands grit, technical excellence, ability to analyze and adapt to different situations and deep reservoirs of character and stamina - qualities that translate well to real life.